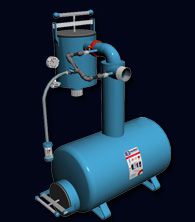 When the irrigation source water contains heavy loads of suspended particles, the first challenge is filtration. Sand and larger silt particles can be effectively removed withhydrocyclonic sand separators, which spin the water and remove the heavier particles through centrifugal and gravitational forces. Larger, less dense particles can be removed by a variety of filtration methods including screens, disks, and sand media filters. That leaves the finer silt and clay particles, which theoretically should pass through the filter, but they don't. Unfortunately, due to its sticky nature, silt can aggregate and become an irrigation challenge forcing us to "deal with silt" after all. Silt commonly builds up on the surface of a filter and "blinds it," reducing the flow to nearly zero. However, our newly patented silt filter provides a perfect solution for silt and clay particles and it enables 7/24 irrigation opportunity without filter backwashing, automation or pausing irrigation to clean inner set. Besides, it is easy to install and is user friendly. The filter placed on the outlet may be used as a disk or mesh inner set. While venturi does fertilization through fertilizer suction system, dirty water passes through venturi without entering silt filter. Safety filter is set up in order not to allow particles into the system.

There are three main types of silt filters: First one is Single Silt Filter, which is set as a pre-filter for previously installed filters where it does not filter the water very well or the system suffers from quick plugging or automation starts backwashing too frequently. The most important point in using this single silt filter is that you need to have a high quality filter system installed. To be able to get maximum efficiency, your current filter system should have a healthy and optimum filter inner set. Second one is Silt Filter Set, which is applied as a complete filter set for first time installations. It consists of fertilization unit and a complete filter system. It is user friendly and easy to install.Third one is Backwashing Silt Filter Set which is used not only for underground waters but also for land surface water such as rivers lakes, ponds, channels, dams and pools. It may also be used instead of moss filter without placing mosaic or quartz inside. Backwashing Silt Filter Set removes the moss through safety filter out of the system.